Patients may undergo a number of procedures to assist in the diagnosis and treatment of some arrhythmias. Click on the following for further information:

THE NORMAL ELECTRICAL SYSTEM OF THE HEART

The normal heartbeat begins when an electrical impulse is fired from the sinus node (SA node), in the right atrium. The sinus node is responsible for setting the rate and rhythm of the heart and is therefore referred to as the heart’s natural “pacemaker”.

The electrical impulse fired from the SA node spreads throughout the atria, causing them to contract and squeeze blood into the ventricles. The electrical impulse then reaches the atrioventricular node (AV node), which acts as a gateway, slowing and regulating the impulses travelling between the atria and the ventricles. As the impulse travels down the pathways into the ventricles the heart contracts and pumps blood around the body. The cycle then begins all over again.

The normal adult heart beats in a regular pattern 60-100 times a minute; this is called sinus rhythm.

DIAGRAM OF THE HEART’S ELECTRICAL SYSTEM 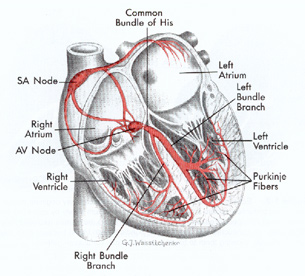 Sometimes, if the conduction pathway is damaged or becomes blocked; or if an extra pathway exists, the heart’s rhythm changes. The heart may beat too quickly (tachycardia), too slowly (bradycardia) or irregularly which may affect the heart’s ability to pump blood around the body. These abnormal heartbeats are known as arrhythmias. Arrhythmias can occur in the upper chambers of the heart, the atria or in the lower chambers of the heart, the ventricles.